My custom studio set-up here in Berlin is almost ready to go!
I already have a few projects lined-up, so am itching to get started...
For more information about my set-up, see the sessions page here.
Posted by Rich Millin at 8:36 PM 1 comment:

In March and April 2012 I will be in Swindon offering 1-2-1 lessons.  I have also been asked to run some Master Classes at The Academy Of Music And Sound and so will also be running additional workshops for up to 10 students wishing to learn more about careers in music, teaching drums as a profession, time, technology in music and more... 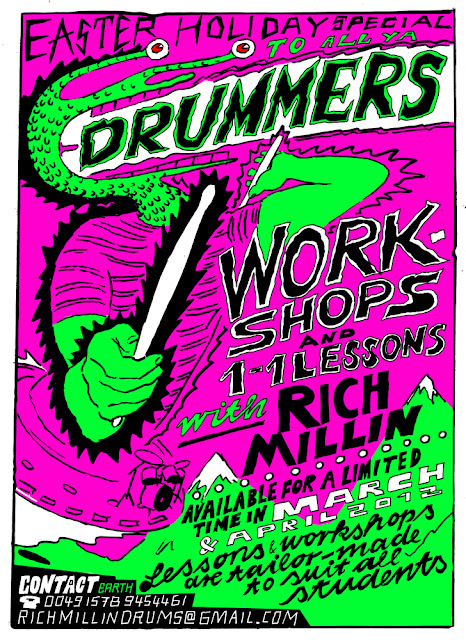 To find out more about this, either email me, or go have a look on my facebook.


Also, there are many gigs with various bands in the UK, including The Dacoits, System Of A Clown and also a gig in memory of a very good friend of mine who passed away this time last year.  Trevor Carter was a very very close friend of mine and I miss him dearly.  The gig (at the Louisiana in Bristol) will celebrate his memory and his music and bring together a collection of musicians who had the pleasure of working with him and being inspired by him over the years...


Here are my full gig listings (as it stands):

Rich Millin has a brand new BandWoke up from my dream because I could hear the doorbell ringingTrod on the laptop plug cos I was focused on the birdies singingCheck my face in the bathroom mirror, yes I look fucking mingingI wonder what delights, Wednesday the eleventh is bringing?Oh yeah, I have an interviewAbout 5pm, in fact, make that quarter toRun down the stairs get the door. 'Hello Clive how are you?''I got your suit I borrowed, and I bought you a yellow tie too!'I just woke up, so I ain't in the best of fettleAnd I got morning breath that's so toxic I could melt a petalLively up yourself today is gonna test your mettleGo outside, light a cigarette, tread on a stinging nettleShit! now my foot is soreAnd I am walking like a penguin across my kitchen floorI am also shivering while my cup of tea I pourIt's blooming cold so I better shut the kitchen doorTurn on the laptop and Facebook says Rich Millin has a brand new bandI cough, and spill a little of my hot tea on my handWell that was something that wasn't plannedBut I needed a drink to clear my throat of the night time sandNow I am waking up and embracing the morningI stretch my arms and legs and then I have a bout of yawningThe reality of this important interview I have is dawningGet on the qwerty keys to see what shite my mind is spawningI check my statuses and all the overnight notificationsLook at responses to see if I've caused any complicationsLog in to Spotify and I hear Devlin's destinationsThe days are gone of big mouths doing breakfast shows on radio stationsGo back outside for a second cigaretteI know, I know, I don't need one yetBut it's just a result of my OCD and obsessiveness and the urge I getBecause I have not found that happy ground that will cure me yetFuck, I got some shiz to doI need a shave, a shower and a haircut tooGotta get some paint splashes off of my left shoeAnd get to the bank and back before half past twoGet in the shower and my body I wash and my muscles I flexI wish that I could learn to calmeth and relaxMy life is either dull or manic and crazy and complexYeah I know, things will change for me once I have some wicked sexI close my eyes and let the water splash on my wrinkled faceI am quite lucky to have found a room in this little placeEven luckier to have privacy and my very own resting spaceWhere I can be creative or reclusive- it's fucking ace!Get out the shower and catch a glimpse of my reflectionDamn there are new grey hairs upon a bit of closer inspectionBut; I think I done ok since last year and my love rejectionAnd no, I'm not about to end this verse with a line about my thick erection!Remove a bit of crusty sleep and a random hair from my noseGo to my bedroom, sit on the bed and select some clothesNo, they are for Denmark so I can't wear thoseDouble denim day it is then I supposeLight jeans on the bottom and dark jacket on the top half?I hold them up against my body in the mirror and I fucking laughI'm gonna decide while I clean my night time skin and 'bits' from the bathShit! I lean over a bit too far and I've pulled me calf!Just another stark reminder that old age is gradually settling inWhich jerks my memory about things I've done and places I've bin (it rhymes!)I rub some Dove for men smelly lotion on my skinWhilst remembering how I used to pull cos my face was nice and my body was thinI know that none of you really caresIf I go in to town in a ladies blouse and 70's flaresSo I preen myself a little more and shave my pubic hairsBefore wrapping a towel around myself and heading back downstairsI feel all lovely and soft and smell quite niceBefore I know it, the kettle's on and a fag is lit in half a triceIt's probably boredom cos my life is lacking a little spiceTalking of spice, I'm gonna do something nice for tea with some jasmine riceWell, cup of tea and third cigarette done and dustedNeed to get out of the house cos alone with myself I can't be trustedFor the purpose of this rhyme I'm back on Spotify listening to BustedThis section is a waste of time and I should never have started it, silly bastard!Nip back upstairs and I rapidly start to get dressedStart with jeans and no underpants and a nice little white vestIt makes me look like I got quite a lovely chestReady now, I check myself and boy do I look blessedSo now my morning has come to an end and my day is plannedIn the hallway by the front door ready to go I standCheck I got my bank details and my front door key in handOh... did I mention... Rich Millin has a brand new band?!

Email ThisBlogThis!Share to TwitterShare to FacebookShare to Pinterest
Labels: Rhymestore

So, happy new year and all that!

I haven't posted for ages and so I thought I would share with you everything that has been happening in the Rich Millin world of drums and also what I have planned for the first part of 2012...

Firstly, thanks to everyone for reading and participating in the Drumazine!  It's a small venture where I get to speak to lots of drummers about their lives and get an insight into who they are and what they do, all for my own personal and completely selfish wish to gain more knowledge about what it means to be a drummer...

I don't know about you (even if you're not a drummer), but I suffer from serious self doubt.
I am always questioning what I do and how good (or not) I am at it.  I never know if I'm right or wrong.  I never think I'm good enough and I always think that everyone else is much better than me.  Maybe because they are more disciplined?  Or maybe because they are naturally better?  Or is it because I am lazy?  And why did I never get that massive world tour or that lucky break or session which would have propelled me onto the world scene of top drummers...???  Obviously it's because I am not good enough...
Having said that, what would I do if I did succeed in my ultimate career dreams?!  I might be too nervous or get it wrong or maybe, maybe...  Ahhhh!  I don't know!

Anyway, that was the whole point in Drumazine.  I really wanted to interview other drummers, some who have made it and some who haven't and some who are teachers, some who just play for fun and some who are struggling just like me to find out if I am alone in my thoughts.  They fact I am sharing these interviews with the drumming world is just something I thought would be fun.  Turns out I was right!  Drumazine has had well over 1,500 hits in a month!  It's ace!  I love the feedback I am getting and the positive response, not only from readers but also from the interviewees themselves!  Amazing stuff!  So again, thanks to everyone :-)

The other things I have been doing include lots of eating and drinking and being lazy over Christmas and New Year visiting family and friends.  It was lovely.  Although, coming from a fairly sleepy little town in mid-west UK, I really wasn't prepared for the war-zone in Berlin on New Years Eve!  Seriously, there must have been about €1,000,000.00 spent on fireworks!  It was like being in Berlin circa 1943!  Explosions everywhere!  The guy on the balcony next door was sat there happily firing his fireworks at the apartment in the building opposite!  The guy opposite, instead of getting pissed off or calling the police, simply went up onto the roof of his building with a big stock-pile of ammunition and started firing back!
Ridiculous!

Before that, (I seem to be working backwards chronologically from now to my last post for some reason?!), I was in the UK for a ridiculous amount of drinking and some absolutely unforgettable gigs with The Dacoits and BabyTrain.  It turns out that The Dacoits can pull off a 20 song, 90 minute set no problem and BabyTrain can play a somewhat flawless gig without even having 1 practice in 5 months!
I miss my UK bands...

I am, however, keeping very busy in Berlin with other musical projects...  Mr David Marx has been here lots to rehearse for a gig this Thursday 12th January at The Ufer Cafe in Berlin.  I am extremely excited about my first Berlin gig, so if you are in the city and can make it down , please do...  :-)

Also, (and this is the scariest thing for me to plan for in 2012), I have been asked to run a Master Class at The Academy of Music and Sound in Swindon in March for the end of term Master Class week.
Me!  A Master Class!  HA - Awesome!

Anyway, I have a lot of preparation to do for this.  I am hopefully going to be touring this Class around all of the Academies in the UK and while I am in the UK (around 20th March until 10th April) I will be offering 1-1 lessons (limited time obviously!) and also will be running some other drum workshops for anyone wishing to attend.  The workshops will be based around careers in music, new technology in music and for drummers who wish to know more about:

a) careers in teaching
&
b) drum specific and playing workshops looking at time itself - (time signatures etc...)

So, let me know if you are interested in attending a workshop or if you would like a tailor-made 1-1 lesson.  (Swindon only).

Finally, whist in the UK in March/April, I am happy to announce a mini tour for System Of A Clown!  (It really is a mini tour, so far two dates!)  7th April sees us at The Furnace in Swindon and the 8th April we will be at The Louisiana in Bristol.
For more information visit the Facebook group here. 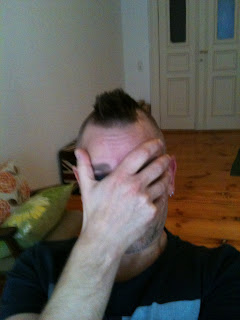 Posted by Rich Millin at 1:23 PM No comments: